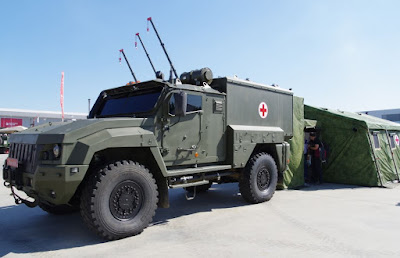 Militarymedia.net - Moscow, - Not wanting to be left behind by other combat vehicle manufacturers (ranpur), Russia's defense industry is currently developing a special battlefield armored ambulance.
It was Kamaz who initiated the creation of an anti-green vehicle-based ambulance (MRAP) with the production of Typhoon 4X4 for the Russian military.
The newest combat ambulance named Linza, was designed by Kamaz to be able to protect the medical personnel who served on the front lines during the war against terrorists or enemy forces.
To test the power of Linza, the Russian military began to specifically send these combat ambulances to the Syrian army.

Citing Russia Beyond, Linza has been placed on a hot battlefield in Raqqa, a city now under the control of the Syrian Democratic Forces (SFD), a group that opposes the Damascus government.
Basically Linza itself is a special armored car to carry out evacuation missions for the wounded on the battlefield.
To survive on the battlefield, Linza's body is coated with composite material (steel plus ceramics) that is able to withstand the assault rifle bullets and 12.7 mm caliber shotguns and collisions of artillery shells.

Under his body, Linza was also able to survive the explosion of landmines or from IED (improvised explosive) approximately 8 kg of TNT.
No less interesting, the vehicle can still go with a speed of 50 km / h over rough terrain even though one of the wheels has been destroyed.
In a field combat operation, doctors can treat injured victims in the main compartment behind the driver's cabin.

Linza can also accommodate up to four people in a reclining position or six people when seated.
Medical personnel can also combine the position of the victim being transported. For example two people lie down and three others sit. 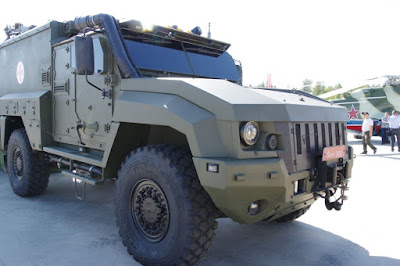 What is clear, Linza will ensure a smooth journey and will deliver injured victims through difficult terrain as comfortable as possible.

Linza's standard default equipment in addition to stretchers and medical equipment, are five cameras mounted around the perimeter to get a view of the field being traversed thoroughly.
There is also room for a machine gun mounted on the roof, which is operated by the driver's assistant from the screen inside the armored compartment.

In the military ambulance market, at least Linza will compete with Otokar Cobra II ambulances from Turkey which have also been tested by war.
Other challengers came from neighboring Georgia, which launched Didgori AMEV (armored medical evacuation vehicle). This vehicle is produced by STC Delta, which is reportedly also now owned by the Police Mobile Brigade.
Army
russian military