Turkish military - Turkey is ready to activate the S-400 missile defense system purchased from Russia according to its schedule. This sophisticated defense weapon is activated when Ankara military personnel complete their training.

Defense Minister Hulusi Akar said the training process for the operation of the missile defense system was ongoing. "After this process is finished, we will carry out activities planned (on the S-400)," Akar said in a meeting with Turkey's parliamentary planning and budget committee on Thursday.

The United States (US) believes that the Russian weapons system can be used by Moscow to secretly get secret details on F-35 fighter jets and is not compatible with NATO systems.

However, Turkey insisted that the S-400 would not be integrated into the NATO system, or pose a threat to the alliance. 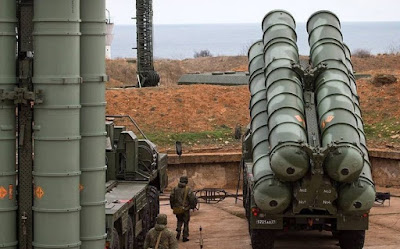 Answering questions about Syrian forces supported by Turkey who are fighting Kurdish militias (YPG / PKK) in northern Syria, Akar said the Syrian National Army (SNA) was not part of any group, but were loyal and working for their country.

"As a result of our operations, the illusion of forming a terror corridor, the state of terror (in northern Syria) is ended,"

Ankara reached two separate agreements with Washington and Moscow last month. One of the points of the agreement was that Turkey agreed to stop its operations in northern Syria to allow YPG / PKK militias to withdraw from the planned safe zone, where Turkey wants to repatriate millions of Syrian refugees currently accommodated by Ankara.
russian military
Turkish military