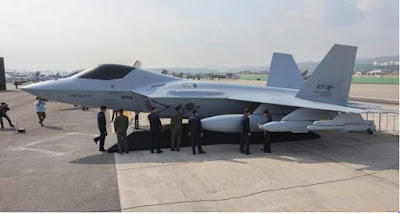 Militarymedia.net - South Korea - Following the success of the fourth generation F-50 light fighter jet program, which has been widely exported and proven to be very effective in fighting in Iraq and the Philippines, Korea Aerospace Industries (KAI) of South Korea is working to develop a fifth generation fighter aircraft under the KFX program. The program is very ambitious, with South Korea being relatively new in the field of military aviation especially when considering that there are only two countries in the world, China and the United States, which have deployed fifth-generation fighter planes locally developed in active Air Force units.

The KFX program was announced in 2001, four years before the United States dedicated its F-22 Raptor as the first fifth generation fighter in the world. PT Dirgantara Indonesia (PTDI) started to become a partner in the joint program of KAI in 2010. The Korean side holds an 80 percent stake in the program while the Indonesian side, with lower defense spending, underdeveloped military industrial base and fewer planned purchases, holds The remaining 20 percent.

KFX will be a twin-engined, lightweight, twin-jet jet seat capable of sophisticated stealth, and will prioritize low operating costs and ease of maintenance that will enable the South Korean Air Force to procure it in large quantities. This will also be the key to successfully marketing jets for export in Southeast Asia especially those also buying F-50s for this reason. The South Korean combat fleet is one of the largest in the world today, and with many fleets rapidly aging, there is room to induct several hundred KFX into service. This is the key to ensuring large scale production and cost-effective end products. 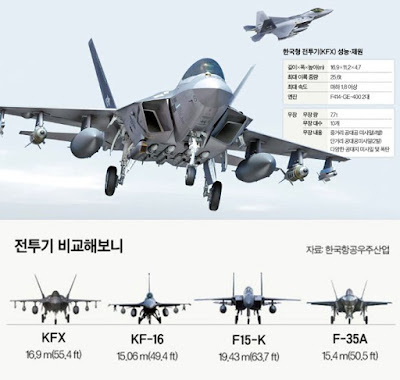 The fighter is expected to replace South Korea's F-4E Phantom and F-5E Tiger, which is the most widely used fighter currently with around 175 units on duty. Together with two F-4 units of 30 Phantoms each, the third generation jets currently operate in ten squadrons. If everything is replaced with KFX, it will be possible to run production that is large enough for domestic use alone beyond the production process expected of all other fifth generation combat programs in the world besides the American F-35 and possibly the J-20 China. The higher operational costs of KFX, especially compared to F-5, will likely mean that the number of squadrons will be cut or that the squadrons will be made much smaller because Tiger will be eliminated with new stealth aircraft.

In addition to replacing South Korea's third generation fighter aircraft, KFX also has the potential to replace most of the fourth generation fleet of the South Korean Air Force (ROKAF) which currently consists of F-16 and F-15K platforms. South Korea received its first F-16 fighter in the 1980s and currently has 163 aircraft, in addition to 60 of the newly acquired F-15 aircraft. The F-15K is still a very modern heavyweight jet capable of carrying out air-to-air attacks and operations, and neither the F-35 nor KFX can match flight performance or endurance.

The F-16, which was designed as an analog aircraft that was lighter and cheaper than the F-15, was increasingly considered an aircraft that was soon obsolete, Singapore Defense Minister Ng Eng Hen told US Air Force Combat Air Command Chief General Mike Hostage predicting that the aircraft would become obsolete in the near future. While regular upgrades by Korea to the design could potentially extend its service life, especially for later production variants, it is likely that the South Korean Air Force will try to retire at least a large portion of the fleet to be replaced with KFX. The relatively low operational costs of new stealth fighter aircraft will make this aircraft quite affordable, and will be a serious increase for the South Korean fleet.

Aside from the acquisition for its own Air Force, KFX is expected to be marketed for export to Southeast Asian countries, especially those expected to become major clients. Thailand, the Philippines, Indonesia, and maybe even Iraq could be a major client for fighter aircraft, all of which operate F-50s and F-16s or F-5s which are designed to be replaced by KFX.

Although it doesn't yet have full stealth features compared to the F-35 and integrates a less powerful engine, the advantages of KFX fighter jets have lower operational costs, easier maintenance, and lower prices. The new fighter aircraft is expected to be faster and be able to operate at higher altitudes than the F-16 and F-35, and will have access to various types of advanced ammunition. The most prominent of these are the original derivative of the European long-range Taurus bunker cruise missile, one of the most reliable in the world currently used by F-15K fighter aircraft, and the Meteor long-range air-to-air missile that has a capability twice the range of AIM AMRAAM -120C used by the F-35.

The fighter planes are also expected to be compatible with several types of US-made missiles, which means they may begin to integrate AIM-260 air-to-air missiles which are expected to start operating in the second half of this decade. These missiles are expected to be faster, more maneuverable, longer distances, more precise and cheaper than European Meteors. If South Korea's contract to acquire Taurus missiles is considered as an example, the country could request technology transfer as part of its contract to acquire Meteor missiles which in turn allows the manufacture of missiles with similar capabilities at home.

Based on the precedents set for a very high-performance and cost-effective weapons system set by the South Korean defense sector, such as K9 Thunder artillery and K2 Black Panther battle tanks to F-50 fighter planes and Hyunmoo-3 cruise missiles, KFX is expected to be one of the fifth generation of the most successful combat programs in the world and quite possibly the most successful outside of China and the United States.

With Russia's Su-57 program hampered by very small production steps, Turkey's TFX program which seems overly ambitious but relies heavily on foreign technology and comes from a country with a much more limited domestic technology base, and Pakistan's AZM fighter project is expected to be built in around China rather than with native technology and placing great emphasis on reducing costs like JF-17 before, this left KFX as a leader among the original fifth generation programs outside of China and the United States.
Air Force
South Korean military
US Military