Home Air Force US Military After 40 Years on the Air, the KC-10A Tanker Airplane Begins to Retire

After 40 Years on the Air, the KC-10A Tanker Airplane Begins to Retire

United States, militarymedia.net - First flight on July 12, 1980, that means the age of the KC-10A Extender tanker has reached 40 years, and as if following in the footsteps of the DC-10 commercial aircraft that became its platform, the KC-10A reportedly began to enter the era pension. In a ceremony at the McGuire-Dix-Lakehurst Joint Base, New Jersey, on July 13, 2020, a farewell ceremony was held at the inaugural unit of the KC-10A which will be flown to its final resting location at the boneyard (graveyard of aircraft), Lanud Davis-Monthan, Arizona .

The first KC-10A retired was an aircraft with registration number 86-0036. At Lanud Davis-Monthan, KC-10A will be handled by the 309th Aerospace Maintenance and Regeneration Group, where several important components of the KC-10A will be stripped down and used as spare parts for the KC-10A fleet which is still operating.

The US Air Force operates a total of 59 KC-10A Extender units that are deployed at various domestic and foreign bases.
Apart from aging reasons, the KC-10A pension program is also encouraged by the increasingly difficult to maintain a supply chain of spare parts, especially the stock of DC-10 aircraft operating increasingly depleted, where most KC-10 parts rely on cannibals from the remaining DC-10. The plan, until the end of 2020, the US Air Force will retire two more units, namely KC10A with registration numbers 87-0120 and 83-0077, it is hoped that the pension process will both be carried out in September 2020.

Besides being used by the US, the Dutch Air Force also still operates two KC-10A units, one of which even hung out at Soekarno-Hatta Airport, while accompanying two Dutch F-16 fighter jets that participated in the 1996 Indonesia AirShow. 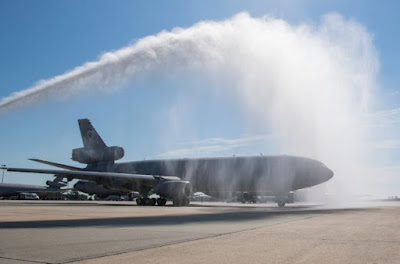 Referring to its history, the KC-10 Extender flew first from the McDonnell Douglas enclosure on July 12, 1980. While officially began operating by the US Air Force in March 1981. Nearly 88 percent of the KC-10 Extender components are identical to the DC-10 used by civil aviation, this is a point it is important that the operator is interested, given the ease of maintenance and the similarity of spare parts.

Interestingly, one unit of KC-10 Extender was also operated by a civil operator, namely Omega Aerial Refueling Services, a private company based in San Antonio, Texas. KC-10 services from Omega Aerial have been used by Australian F / A-18 Hornets on flights to Red Flag training in Alaska.

Initially, KC-10A which can distribute 161,478 kg of fuel will still be maintained by the US Air Force until 2043, but the decision to accelerate KC-10A retirement has been carried out. In its place, the US Air Force has designated the Boeing KC-46A Pegasus as the backbone of the tanker and cargo fleet.
Air Force
US Military