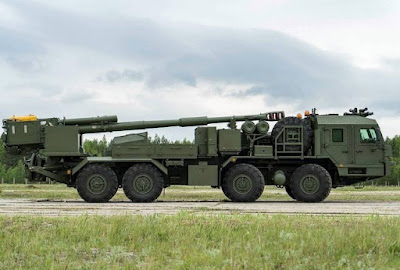 Moscow, - MilitaryMedia.Net Not wanting to be left behind by the world trend that is launching the SPH (self-propeller howitzer) wheeled tire, the Russian defense industry launched the truck-based 2S43 Malva in mid-July 2020.

Compared to the wheeled version of the chain, SPH wheeled tire has a lighter weight and more agile maneuverability.
This combat vehicle does not need a transport truck so that it can be driven quickly to the destination point.

Malva was developed by the Burevestnik Central Research Institute, a division of Uralvagonzavod which is now part of the state company Rostec.

As the Airspace Review learned from Army Recognition, the Malva vehicle is based on an 8X8 BAZ-6010-027 military truck chassis manufactured by the Bryansk Car Factory.

Malva's presence is said to be able to replace the role of the SPH's old-wheeled SPH of the Russian Army, namely 2S19 Msta 152 mm and 2S1 Gvozdika 122 mm.
russian military