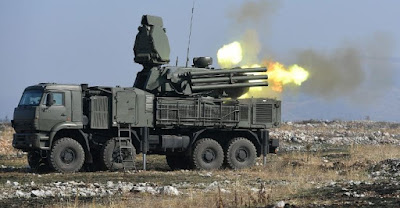 Military Media.Net : Moscow - The hanud (air defense) weapon system is used to deal with targets on the surface, it's not something strange, especially with a large caliber, the hanud cannon whose barrel elevation is adjusted horizontally, it can be an auxiliary weapon for infantry. turn off. As if escaped from the capture of the global media, it seems that the Pantsir hanud system made by Russia has also succeeded in executing the firing mode on surface targets.

Quoting a source from the Russian Defense Ministry website - eng.mil.ru (29/7/2020), the Pantsir S-1 hanud system has successfully carried out a test fire on a target in the form of an armored personnel carrier. The test firing took place in the midst of extreme weather, at zero degrees temperatures and wind speeds of 20 meters per second.

At a distance of 3 km, the target was reportedly destroyed by a combination of Pantsir cannon fire. The firing test was carried out by a tactical group from the Russian Northern Fleet based on Kotelny Island, Laptev Sea in the Arctic region.
Pantsir's test firing in the Arctic region was carried out as part of a coastal defense operation, which Pantsir simulated as a defense system to thwart enemy landing attempts. It is known that the Russian Northern Fleet tactical group is also equipped with the anti-ship Bastion missile, which plays a role in protecting Russian interests in the northern sea route. 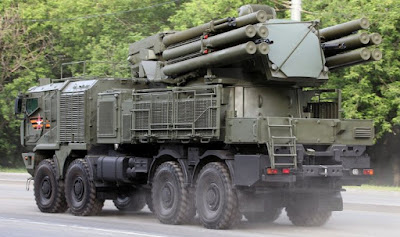 In a separate statement, KBP Tula is always the developer and manufacturer of Pantsir, saying that Pantsir was actually designed to be flexible in facing anti-air and surface operations. Among the highlights of the manufacturer are the ability to fire the cannon in a moving vehicle position, a modular design, a multiband radar-optic control system that is jamming resistant and capable of facing multiple targets simultaneously.

The Pantsir Canon uses the Tulamashzavod type 2A38M caliber 30 × 165 mm. Adopted from the GSh-30 canon base found in the Mi-35P attack helicopter, the 2A38M cannon carries two barrels in one canon system, as a result the Pantsir S-1 has a total of four cannon barrels. The outermost barrel is equipped with a projectile velocity gauge, which supplies data to the fire control computer as a component of the calculation for targeting targets.
In order not to overheat quickly, the barrel of the canon is equipped with a cooling jacket filled with water. For operation in arctic regions, this jacket can be replaced with anti-freeze liquid.

The destructive power of the 2A38M cannon is fairly frightening, having a firing rate of 1,950 - 2,500 bullets per minute, or if it is multiplied by two by the number of barrels, a maximum of 5,000 bullets per minute can be spit out. The magazine system adopts a chain-supplied box, and is fed into the module via a munition hatch located on the side of the module. 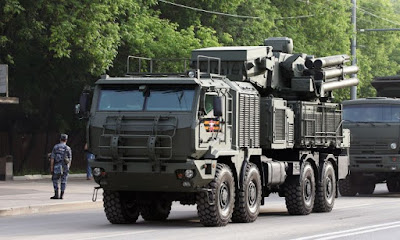 When the shooting took place, the cartridges were immediately thrown out of the vehicle. The effective range of this canon is up to 2,000 meters for moving targets. But to hit a static target, the shooting range can reach 4,000 meters.
Air Force
russian military