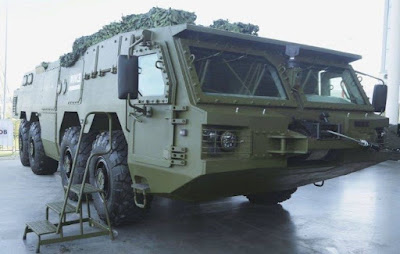 Militarymedia.net - Moscow - Although he is already well-known as an individual weapons manufacturer, Kalashnikov has since several years ago released several defense products other than machine guns. After releasing a noise-free trail bike, kamikaze drones, anti-drone weapons and patrol boats, there is the latest news from the Army 2020 event, that this legendary Russian manufacturer has released a tire-wheeled armored rantis chassis for the needs of the Arhanud line. This was Kalashnikov's first foray into tactical truck design.

It is said that the Kalashnikov Group launched a prototype racist chassis which is labeled Spetsialnoye Korpusnoye Kolesnoye Shassi-568 (SKKSh-568), where the rantis is staying as a launch platform for hanud missiles.

This romantic prototype project is fronted by the JSC Mytishchi Machine-Building Plant (a Kalashnikov subsidiary) and has been in development since 2019. A company spokesman said the SKKSh-568 has met the requirements required by the Russian Ministry of Defense and foreign customers. The SKKSh-568 is 8 × 8 propelled and features ballistic protection and amphibious capabilities.

JSC Mytishchi Machine will develop the SKKSh-568 for adoption on various platforms, but the main one is as an hanud missile launching platform. For the first stage, the SKKSh-568 will be integrated with the Tor-M1 missile launcher. Currently testing is continuing on the prototype, and it is planned that trials with the Tor system will begin in 2021, after which serial production of the platform will be carried out in 2023.

This chassis is supported by a diesel engine from the Tutaev Motor Plant with a power of 650 hp. In theory, the engine performance can support a maximum speed of up to 80 km per hour and an average speed of 60 km per hour on surface roads. The platform's maximum cruising range is 800 km. For amphibious capabilities, two water jets are installed at the rear of the vehicle.
russian military