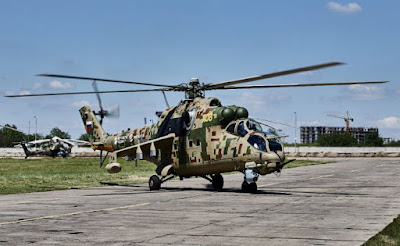 Militarymedia.net - Moscow, - After offering the Mi-35P upgrade package in 2018, Russian Helicopters (part of the Rostec Corporation) is now introducing a new variant of the Mi-35P “flying IFV”. The new variant in question is actually the result of an upgrade made at the production facility in Rostvertol. The first model of the new Mi-35 has completed specific flight tests and received confirmation of its performance characteristics based on the new weaponry and new types of onboard equipment.

The series of tests resulted in the finalization of the helicopter design which confirmed the model's readiness for the mass production phase. "Last year we demonstrated this helicopter to a number of potential customers, and today we can confidently say that the helicopter is reliable, we have also launched serial production of the Mi-35P under the first contract with a foreign customer," said Andrey Boginsky, Director General of Russian Helicopters. 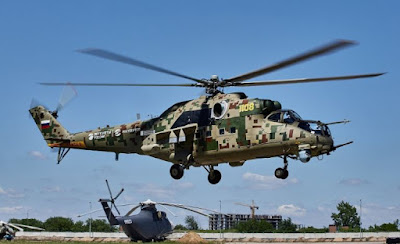 The newly upgraded Mi-35P is equipped with the OPS-24N-1L target sight system which is enhanced with 3rd generation long-wave matrix thermal imaging, high-resolution color TV camera and laser rangefinder. The helicopter crew is also equipped with modern 3+ generation night vision goggles, as well as a set of external and internal lighting equipment adapted for crew use.
The flight control system is also all-new with the support of digital technology to improve control and stability of the helicopter and provide automation to pilots. In addition, the targeting and computing systems have also been updated to improve fire accuracy.

The new Mi-35P variant is also expected to fly at any time of the day in simple or difficult weather conditions, whether flying under visual and instrument rules, in various geographic conditions, including over non-landmark terrain. At the same time, the Mi-35P can maintain its ability to carry out both guided and non-guided weapon fire in all conditions. The new Mi-35P design is also said to be designed to reduce the operator's maintenance burden. 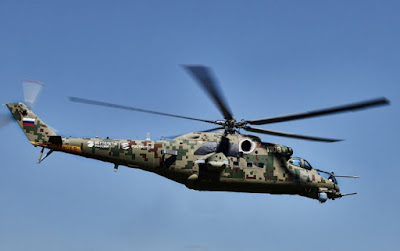 For information, the Mi-35P is an export variant of the Mi-24 Hind-E. Easily recognized by the adoption of a fixed side-mounted canon, the GSh-30K 30 mm caliber. This two-barrel canon is attached to the right side of the cockpit. Ammunition stock for this canon is 750 rounds.
In its operation, the Mi-35P requires a crew of three, consisting of a pilot, a copilot who doubles as an arms operator and a technician (flight engineer). The pilot seat formation is above the copilot's seat position.
russian military