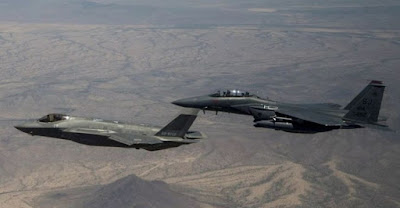 F-35 operational costs reach USD35,000 (Rp. 488.9 million) per hour per unit. The Senators want to know why the expensive fighter plane was used to attack a group of ISIS terrorists hiding in the bush when cheaper options were still available.

The US military has confirmed that coalition forces attacked the ISIS base on Qanus Island, Iraq, on Tuesday. The terrorist group was bombed at its hiding location, in dense vegetation. (Read: The F-35 and F-15 US Drop 80,000 Pounds Bombs in Iraq)

The Senator asked Barbara Barrett - the Air Force Secretary candidate wanted by President Donald Trump - to be asked for his opinion on Thursday whether using an expensive airplane for such a mission was a good financial decision.

"I have real concern about using a fifth generation airplane to attack a group of terrorists hiding in the bush," Republican Senator Tom Cotton told Barrett.

"It feels to me as if we have to use a suitable aircraft in an environment where we have total air dominance, and F-35s and their pilots must be trained for high-level conflicts against opponents like China," he said.

Cotton was very worried that the F-35 was being used in view of a Government Accountability Office report that said the F-35 supply chain did not have enough spare parts available to keep the aircraft operating according to military requirements.

Jack Reed, Democratic Party Senator agrees with Cotton. He expressed his concern about the continuing fate of the high-tech jet fighter, which is the most expensive weapons program in American history.

Barrett, the first female pilot to land an F-18 on an aircraft carrier, said reducing flight costs would be one of her priorities as Secretary of the Air Force.

"The F-35 is an important element of arsenal, and we need capability, but the costs for flight hours seem very high," Barrett said. "I will use a background where I have to negotiate and build capabilities so that the aircraft can be flown at less cost," he said.

Congress has repeatedly provided money for the Pentagon to develop light attack aircraft that can carry out operations against enemies such as ISIS at a lower cost than other aircraft.