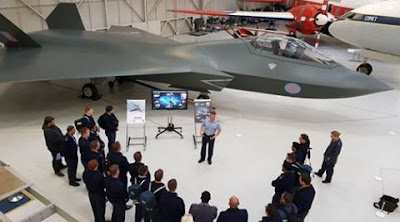 LONDON, - Italy wants to work with Britain on the Tempest jet fighter program which is planned to become a sixth generation fighter. The desire was conveyed by the British Ministry of Defense.

The Tempest project is a British ambition to replace the Eurofighter Typhoon program. Before Italy, Sweden had first expressed interest in joining the development of the sixth generation of fighter jets.

Tempest is a competitor to Future Air Combat System (FCAS), a future generation of fighter jet projects pursued by Germany and France.

"I'm looking forward to working with Italian and Swedish colleagues, as well as others, to put the Tempest program into a hyperdrive," UK Defense Minister Ben Wallace said in a speech at the Defense and Security Equipment International (DSEI) arms exhibition in London.

The agreement between Italy and Britain - which is also to deepen the air combat relations of these countries - covers existing programs such as Typhon and F-35.

Britain last year launched plans for a fighter and a drone group called Tempest, and Sweden said in July that they would join the British fighter jet project.

BAE Systems, the UK's largest defense company which is a maker of Rolls-Royce engines and defense company Leonardo Italy and European missile maker MBDA have worked on developing Tempest. This fighter jet will eventually replace Eurofighter Typhoon in 2040.

On Wednesday the British defense companies signed a statement of intention to cooperate with Elettronica, Avio Aero and the Italian division of Leonardo and MBDA that Italian companies would join the project.

Chief Executive Leonardo Alessandro Profumo said that the agreement meant that Italian company units could work to supply aeronautical as well as electronics capabilities that were being worked on by the British division.

Analysts said it was unclear whether Europe could afford more than one combat aircraft program in the future than the three current programs — the French Rafale, Swedish Gripen, and multinational Eurofighter including Britain.

"What's the key is having a very successful Tempest program. For a taxpayer, having one is better than having two," Profumo of Leonardo told Reuters when asked about the feasibility of two European fighter projects.