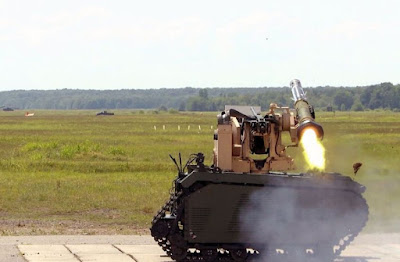 London, - The name of the Javelin anti-tank missile has recently been widely reported, because the pelvic missile made by Raytheon and Lockheed Martin was also tested on the Indonesian Army Combat Training (Latancab) Kartika Yudha 2019 at the Combat Training Center (Puslatpur) Kodiklatad, Martapura. And from the 2019 DSEI (Defense and Security Equipment International) held in London, missiles that are full of combat experience in Afghanistan are released on a mini robot tank platform, aka Unmanned Ground Vehicle (UGV).

In Javelin's appearance on the UGV, Raytheon / Lockheed Martin is not alone, there is a big name Kongsberg, a Norwegian defense manufacturer who previously managed to mix Javelin on the RCWS (Remote Control Weapon System) Protector system. Among M153 Protector (Crows II) as RCWS that will be worked on by PT Pindad for Anoa ranpur.

DSEI 2019, Javelin is featured on the Oshkosh Joint Light Tactical Vehicle (JLTV) UGV platform. While the missile launcher is mounted on the Kongsberg LW30 RCWS, along with the 30 mm Northrop Grumman M230LF canon that is integrated in one dome.

In June 2019 a successful testing was done between the UGV) and the RCWS Protector system. "Shows" Kongsberg took place at the Redstone Test Center, Alamaba, United States of America also featured the Titan UGV equipped with QinetiQ control technology on the Milrem Robotics TheMIS mobility platform. In addition to the Javelin missile, 12.7 mm caliber machine-gun bullets were also fired and controlled remotely.

In addition to being an important milestone in the history of global defense equipment, this momentum is also the first joint firing of Javelin and the M230LF 30mm canon from one RCWS system.

"The combination of a wireless weapons system that is controlled remotely and integrated in the unmanned mode. Here we introduce capabilities that will secure the mission and safety of soldiers to an advanced level, "said Pål Bratlie, Executive Vice President of Kongsberg Defense & Aerospace USA.

"Combining UGV with a modern weapons system will be very difficult for the enemy while on the battlefield. Here, Milrem Robotics already has enough experience and will be integrated with TheMIS integrated weaponry. The addition of the Javelin missile will further distort the enemy, "said Milrem Robotics CEO, Kuldar Vääsi. 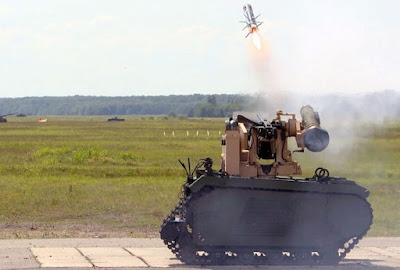 At a glance about Titan UGV, this heavy field devouring robot can go up to 24 km per hour. Its full weight reaches 900 kg and can carry payloads of up to 650 kg. This rubber chain robot is equipped with various sensors for control, including video and thermal systems.
British military