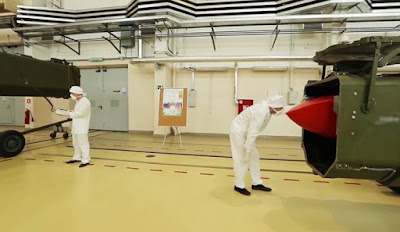 WASHINGTON, - A nuclear-powered missile built by Russia that is believed to have unlimited range is ready to be operated for combat in the next six years or in 2025. This claim is an assessment of intelligence from the United States (US).

The source, who has access to intelligence assessments, told CNBC that the timeline was slightly accelerated by what the Kremlin reported earlier.

Since Putin's announcement, the missile - referred to by Russia as 9M730 Buresvestnik - has failed several trials, including earlier this year.

US officials determined the longest test flight of the missile lasted more than two minutes, with the missile flying 22 miles before it crashed.

Putin claims the new weapon is capable of attacking long range targets. However, two US officials who gave briefing about the ability of Moscow's military to Fox News at the time that the weapon was not yet operational and were still in the "newborn" stage.

"The nuclear-powered cruise missile that Putin is proud of actually crashed several times during the recent tests at the North Pole," said one US official who spoke on condition of anonymity because he was not authorized to talk to the media. "Think about the environmental impact," he said.

News of an accelerated timeline for the readiness of Moscow's new weapons came after a mysterious explosion in northern Russia last month that killed at least five Russian nuclear experts.

US officials told the New York Times after the explosion that the incident involved a prototype of the Buresvestnik missile, also known as Skyfall.
russian military
US Military