Older MiG-29, Better to be Sold or Upgraded?

Malaysia, Russia offers two squadrons of the latest MiG-35 fighter jets to Malasyia and is willing to buy back 18 MiG-29N alum jets that are now no longer flown by the Malasyia Air Force (RMAF).

According to the New Strait Times, this offer was made by President Putin through a special envoy led by the Director of International Cooperation and Regional Policy Rostec Dr. Viktor Kladov to Malaysian Prime Minister Dr. Mahathir Mohamad.

In Malaysia itself, talks about whether or not TUDM accepted the MiG-35 or chose another aircraft were still hotly discussed.

The enthusiasts and observers of the aerospace in this neighboring country are divided into several groups. Among others, there were those who suggested not accepting the MiG-35 because this aircraft was considered responsible. There are also those who recommend accepting the MiG-35 because it has advanced features including having an AESA radar.
Another group suggested adding or buying a new fleet of Su-30MKM and Su-30SM.

Apart from all that, in fact the MiG-29N even though it is an older aircraft and has been used by the RMAF since 1995, can still be upgraded or upgraded. 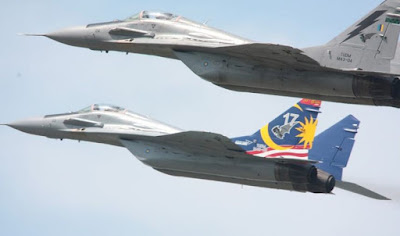 Ukraine for example, will most likely upgrade its MiG-29 fleet so that it can carry a number of sophisticated weapons.

The offer to increase Fulcrum's ability to Ukraine certainly did not come from Russia. Instead, it came from Israel, which is known to be the best in matters of aircraft electronics and radar.

Local media reported, work on improving the capabilities of the MiG-29 will be carried out by Elbit Systems. Not yet mentioned, anything that will be implemented in the package offered by Tel Aviv to Kiev.

The contract itself, so far it has not been signed alias is still under study by the Ukrainian government.

But at the very least, there are indeed alternative choices for those who still want to continue using MiG-29 with a limited budget calculation.

The best choice, obviously buying a new aircraft that suits your needs. However, in the midst of tight military budget faced with defense needs, the choice of upgrading old aircraft is one of the ways that can be taken.

In the next period, the country concerned may have plans to have higher-level aircraft, such as fifth generation fighter aircraft. Or, at least fighter aircraft that can offset the strength of neighboring countries.

The existence of the use of MiG-29 itself is still widely in various countries. Approximately 26 countries still use various variants of Fulcrum.