Military industry sources in Russia admit that they have indeed started sending heavy flamethrowers to Saudi Arabia under a 2017 contract.

"Solntsepek's TOS-1A exports to Saudi Arabia have begun. The first batch of systems has been sent to the kingdom, "a source in the defense industry told Sputnik, Wednesday 10 April 2019.

In 2017, following the results of King Salman bin Abdulaziz al-Saud's visit to Moscow, several defense contracts were signed. Specifically, they discussed the purchase and localization of the TOS-1A heavy flamethrower system, the Kornet-EM anti-tank missile system and the AGS-30 grenade launcher.

It was also reported that Russia and Saudi Arabia were preparing a contract for the supply of the Triumf S-400 air defense system. 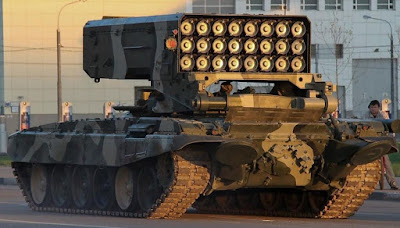 TOS-1 launches a fuel-air explosive (FAE) rocket which causes an explosion with a very large fire. This system is designed to eliminate tightly guarded positions. The effective combustion range of the TOS-1A system is around 6 km.

Speaking to Izvestia, military historian Alexei Khlopotov said many people mistakenly called Solntsepyok an artillery system even though the system was the Assault Tank, which operates alongside infantry formations. For this reason the armored launcher is mounted on T-72 and T-90 tank chassis.

The flamethrower in question is also different from the understanding of the era of World War II which indeed sprays fire from the muzzle of the weapon. TOS is a flamethrower in the sense that it sends thermobaric warheads to areas controlled by the enemy to make them burn.

Defense analyst Sebastien Roblin writes in National Interest TOS-1 has no counterpart in the Western military.

"Although there are all types of multi-rocket launch systems used, such as the M142 HIMARS used by the American Army to bombard [IS1S] in Iraq, they are all light armored weapons aimed at long-range indirect fire," he said.

Sebastien Roblin described the TOS-1 as one of the most powerful weapons besides tactical nuclear weapons.
russian military