Home russian military US Military Russia Does Not Need Aircraft Carrier, but Needs Weapons to Sink It

Russia Does Not Need Aircraft Carrier, but Needs Weapons to Sink It

MOSCOW, - Russian Defense Minister Sergei Shoigu does not bother with the number of aircraft carriers owned by the United States (US). According to him, what Moscow was chasing was a weapon to sink the aircraft carriers that were attacking Russia.

Shoigu also felt no problem with the US military budget that far exceeded Russia, because the Moscow military was present to defend the country, not to attack other countries.

"The US is spending a lot of money on private military contractors, on aircraft carriers. "Does Russia really need five to ten aircraft carrier combat groups, considering we have no intention of attacking anyone?" Minister Shoigu told Russian newspapers.

"We need a way that we can use to fight the enemy aircraft carrier combat groups if our country is attacked. It is much cheaper and more efficient," he said, as quoted by Russia Today, Sunday (09/22/2019).

Russia's military budget actually increased a few years ago for a massive weapons program, but has been canceled in recent years.

The Stockholm International Peace Research Institute (SIPRI) estimates Russia as the world's sixth largest defense shopper in 2018, behind the United States, China, Saudi Arabia, India and France. Meanwhile, the Pentagon was flushed with money under the administration of Donald Trump, and stunted the military budgets of other countries.

Shoigu said that his Russian colleagues had no reason to worry, because taxpayers' money was well spent. 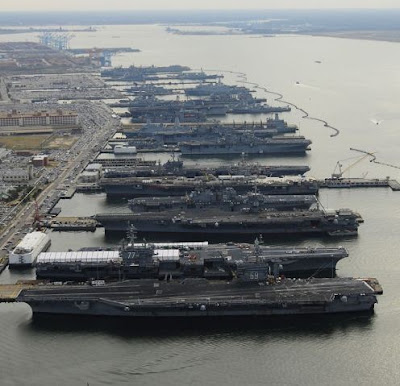 The defense minister also criticized Washington for its habit of justifying its military intervention around the world in the interests of people living in the countries it was targeting.

"In what country they go 'to bring democracy', is democracy developing? Is it Iraq, Afghanistan or Syria ?, "criticized Shoigu." And people can of course forget sovereignty and independence after American involvement, "he said.

He added, the US did not lose its appetite to destroy other countries, either through military intervention or other means.

"Our Western colleagues are happy to accuse Russia of waging a" hybrid war "or whatever. Yes, I say the West is doing the real hybrid warfare. The US will now leave Afghanistan with half the rubble and at the same time they are working hard to move things in Venezuela - of course all for a 'democratic victory', "added Shoigu satire.

The United States this year is trying to overthrow President Nicolas Maduro's ruling government in Venezuela by supporting opposition leader Juan Guaido. However, the attempt failed. Washington has vowed to lift economic sanctions that have paralyzed Venezuela after its "people" took control of the country.
russian military
US Military