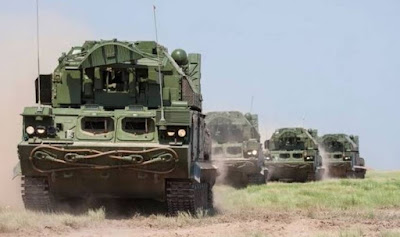 Likewise the training of the crew, has been carried out at the combat training center in Yeysk. While the missile test was first carried out in Kapustin Yar.

The Russian Ministry of Defense announced that the Tor-M2 developers had succeeded in tackling "Saman" type high-speed targets. Targets are launched from various directions with the lowest and highest altitudes.

A total of 20 systems and 200 people were deployed in the exercise.

Tor-M2 is an enhanced version of Tor-M1. This brand-new Sishanud made by Almaz-Antey introduced the first time in organizing the MAKS-2017 aerospace exhibition at Zhukovksy Airport.
The all-digital TOR-M2 variant has better radar and firing control than its predecessor. The system can launch four steps at a time.

In addition to using a chain wheel vehicle base, TOR-M2 is also offered on a wheeled vehicle base.
russian military