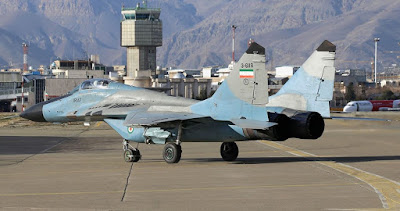 TEHERAN, - An Iranian MiG-29 fighter jet crashed in the Sabalan volcano in northwestern Ardebil province on Wednesday. The fate of the two pilots is still mysterious and efforts to find them are hampered by severe snowstorms.

The Sabalan volcano has been declared inactive. The fighter jet was initially reported lost contact during a routine patrol mission.

Quoting the Tasnim News report, Thursday (12/26/2019), the MiG-29 fighter jet took off from Tabriz Air Base. Some local residents told reporters that they heard a loud explosion near Mount Sabalan when the accident occurred.

The Iranian military stated that the fallen MiG-29 was flown by an experienced pilot, whose fate with other fellow pilots was unknown.

The Sabalan volcano is the third highest mountain in Iran which has a crater lake at its peak.

Earlier reports from local media said the plane had two pilots who were both killed. An investigation is underway to find out the cause of the accident.

The Iranian Air Force has a variety of military aircraft made in the United States (US) purchased before the 1979 Islamic Revolution. The military of the Mullah countries also have Russian-made MiG and Sukhoi aircraft. The series of Western sanctions for decades has made it difficult to maintain an aging Iranian fighter fleet.
Iran's Military