Home Chinese military J-15 and Shandong Aircraft Carrier, Made in China After Buying Su-33 and Kuznetsov from Ukraine

J-15 and Shandong Aircraft Carrier, Made in China After Buying Su-33 and Kuznetsov from Ukraine

China, - Many roads lead to Rome, Demand knowledge to the land of China. These two languages ​​can be used to study the aggressiveness of China's steps to build its military power.

China has done a variety of ways to accelerate the progress of its technology, including making domestic fighter jets and aircraft carriers by imitating ready-made foreign products.

Not to hesitate, China managed to make aircraft-based fighter jets, J-15 Flying Shark which is very similar to the Russian-made Su-33. J-15 (NATO: Flanker-X2) is made by the Shenyang Aircraft Corporation factory.

Where can China get the Su-33?

There is no way to buy a prototype Su-33 that has not been completed, the T-10K-3 from Ukraine. This aircraft was purchased in 2001 and then studied in detail by the Shenyang factory and the 601 Institute.

After everything was successfully mapped, the J-15 manufacturing project began in 2006. It didn't take long, just three years later The first J-15 prototype with the Al-31F engine from Russia and the avionics from the J-11B was able to air on August 31 2009

When photos and videos of the J-15 were published in July 2010, the public was astonished because this aircraft was very similar to the Su-33.

Two years later, the Su-33 was able to air from China's first aircraft carrier, Liaoning (Type 001, hull number 16 or CV-16). This ship is the result of Chinese purchases from the Kuznetsov (Varyag) class aircraft carrier which has not yet been completed. China bought also from Ukraine in 1998. 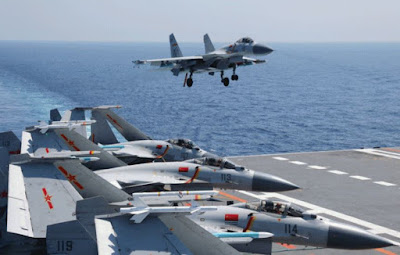 Will be invited to Shandong, is the first aircraft carrier made in China. The aircraft carrier that prints the same blue as Liaoning was made by China in only three years and two months. That is calculated from the laying of the first payment in March 2015 and began shipping tests in May 2018.

A year later, the aircraft carrier owned by the Chinese Navy (PLAN) with hull number 17 (Type 002, or CV-17) had officially entered the ranks of service.

The Shandong aircraft carrier is made by the Dalian Shipbuilding Industry shipyard in Shandong Province. This ship was inaugurated its use at PLAN by Chinese President Xi Jinping on December 17, 2019.

The latest news is that J-15 fighter jets began taking off and intensive landing on the Shandong aircraft carrier.

In the video released by CCTV, it was seen how the Bamboo Curtain country was released showing the strength of its fangs in the high seas. China indeed has to carry out a plan going forward to be able to send the fleet to the high seas.

With all the acceleration of the success and mastery of military technology, it is undeniable that China has grown to become one of the countries with the greatest military power in the world.

China has many resources to make it big. One of the largest capital, is the largest population in the world which reaches more than 1.4 billion people.

This huge human resource obviously will not be dammed compilation can be optimally controlled in various sectors of human life. In terms of military reinforcement this is supported by strong finance
Chinese military