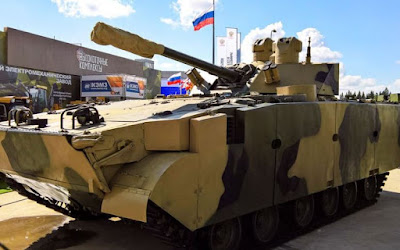 MilitaryMedia.net - Still a family with the BMP-3F Marine Corps, the Russian military is now preparing to accept a new type of ranpur, and reportedly this ranpur will be included in the Russian Victory Day parade in Moscow on May 9, 2020. The intended Ranpur is the BMP-3M Dragun (Dragoon), a type of IFV (Infantry Fighting Vehicle) that uses a firing control system with artificial intelligence technology. Reportedly, besides BMP-3M Dragun, who took part in the May 9 parade was BMP-3 hanud variant (Derivatsiya-PVO).

Dragun is a true unmanned shooting module. Another feature of the Dragun's BMP-3M is a modern fire control system called "Vityaz," which increases the BMP-3M Dragun's fire power compared to the older IFV BMP-3. The advantages of this technology include reducing the preparation time in the shooting process, scanning faster and increasing the attack power ranpur.

Vityaz firing control system is fully automatic, all-digital, with a unified information environment, anti-jamming, and able to track targets on land and air automatically. In comparison to the manned combat modules of the previous generation of BMP-3, Dragun which adopted the RCWS (Remote Control Weapon System) base ensured the movement of infantry troops could operate freely. The module location is at the back of the ranpur, which allows more free space for mounting additional devices.

The main armament of the Dragun RCWS dome consists of a main cannon 2A70 caliber 100 mm and an automatic canon 2A72 caliber 30 mm. Ammunition storage in the dome consists of 22 items for cannon 2A70 and 500 munitions for canon 2A72. The 2A70 cannon can shoot at targets up to a maximum distance of 7,000 meters. Dragun RCWS can also fire 8 ATGM missiles. Still from the dome, there was also a 7.62 mm caliber PKTM coaxial machine gun with 2,000 rounds of munitions.
Dragun RCWS is also equipped with an outside mounted panel for the "VPDU" remote weapon control system, which is fully digital, and is equipped with video information output, vision control, real time with jamming-free or optical fiber free radio lines.

The BMP-3M Dragun is equipped with a four-stroke UTD-32T diesel engine with direct fuel injection plus a 860 hp gas-turbine turbocharger. The location of the engine is at the front, while the compartment for eight infantry troops is at the rear which is equipped with a hydraulic door. The maximum speed of the Dragun's BMP-3M is 70 km per hour and swimming speed in water reaches 10 km per hour.

The standard weight of Dragun's BMP-3M is 18 tons, but when added additional protection, ranpur weight can reach 21 tons. This Ranpur OJSC Kurganmashzavod production has passed the trial in 2017 ago.
Army
russian military
tank