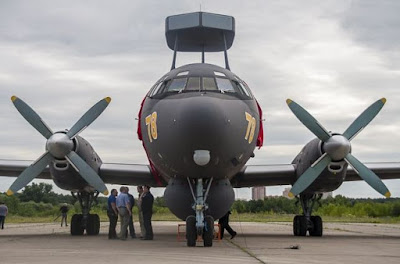 MilitaryMedia.net - Moscow - Wednesday, April 8, 2020, there was a tense incident in the skies of Alaska, when a Russian maritime reconnaissance aircraft, the Russian Ilyushin IL-38N type was detected in the United States Air Defense Identification Zone (ADIZ) in the Alaska region. And not wanting to take the risk, the North American Aerospace Defense Command (NORAD) then sent a F-22 Raptor stealth fighter jet, and a Raptor intercept incident occurred on the Il-38. Although it did not end up in the heat of the Washington-Moscow political tension, what became interesting here was the figure of Il-38, which was classified as a legendary reconnaissance aircraft since the Cold War era.

Flashbacks on December 7, 2010, two Russian Il-38 units were reported to appear above the Sea of ​​Japan near the Noto Peninsula, both planes known to conduct "disturbances" in joint exercises between the US-Japanese Navy. The exercise was eventually suspended due to concerns that the Il-38 was carrying out a surveillance mission on US / Japanese naval activities.

Ilyushin Il-38 (NATO code - May) is actually a reconnaissance aircraft. Ilyushin Il-38 first flew on September 28, 1961, and was officially used by the Soviet Union in 1967. By global military analysts, the Il-38 is referred to as an aircraft copy of the Lockheed P-3C Orion, because Orion first flew first in 1959 .

Besides being operated by the Russian military, Il-38 users in several variants are only Indian and Egyptian. Even Egyptians only used Il-38 until 1976.

Well, in the ambush incident by the F-22 Raptor on April 8, competing was the latest upgrade variant of the Il-38, which was labeled Novella's Il-38N. Quoted from ainonline.com, Il-38N is operated by the navy and inaugurated its use by the Russian Navy Aviation Service Commander General Igor Kozhin on January 31, 2020 in Lanudal Ramenskoye, south of Moscow.

General Igor Kozhin said that there were about 30 of the 54 Il-38 fleet units that would be upgraded to become Il-38N variants, where the entire upgrade program would be completed by 2025 and would later be deployed in the Pacific and Northern Fleet.

Ilyushin Il-38N features a new technology called Novella P-38 search and sighting system made by the company from St. Petersburg, Leninets. This control technology replaces the Berkut-38 which is now installed in the old Il-38 variant. Novella P-38 is able to track 32 targets simultaneously, and has a detection range at an air target of up to 90 km and a detection range at targets at sea level as far as 320 km. India is said to be a user of the export variant Novella P-38 installed on Il-38SD, in its marketing language, Novella P-38 is also referred to as the Sea Dragon sensor suite.

The Russians also realized how old the Il-38 design was, "This is an old platform, but we expect a substantial increase in mission equipment updates. Other maritime countries will be surprised by the new capabilities that Il-38 will show after modernization, "said Igor Kozhin.

Kozhin described the Il-38 as the first Russian anti-submarine aircraft capable of long-haul long-distance flights over the ocean, and was still able to locate and destroy submarines. He also praised Ilyushin for producing unique and durable machines.

Il-38 deployed by Russia is not limited to spying on the sea, but its intrinsic function is the destroyer of submarines. As a destructive force, Il-38 is equipped with two bomb bays which can load a variety of munitions, ranging from torpedoes, sea bombs and mines, to a total payload of 9 tons. Similar to the Orion P-3C, a magnetic anomaly detector (MAD) appears on the tail. To accurately sniff the opponent's submarine, one of the bomb bays was prepared as a launch point for sonobuoys. (Haryo Adjie)